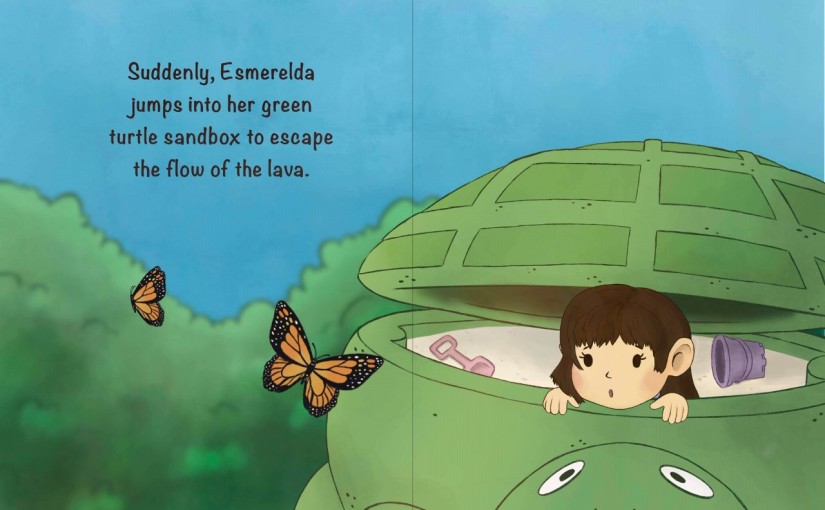 My STAR student and talented writer and artist Wesley Helms is working on the illustrations for “Esmeralda’s Surprise.” I’ve got a little sneak peek of one of his pages.

So, when Anya was a baby, 19 years ago, I began writing a children’s book series to read to her at night. I created a character called Esmeralda who I loosely based on Anya’s dark hair and skin (compared to mine since I am SO white) with her bubbly personality. Anyway, I wrote several on word documents with titles like:

“Esmeralda’s Surprise” (about a dragon)

“Esmeralda and the Attack of the Pocket Fuzz”

Anyway, I only shared these stories with my former students and my girls as they grew, but I always had hopes of having her illustrated and one day published.
Last year, I contacted Wesley (one of my former Wilcox kids who picked me as his STAR teacher in 2014) because he is such a talented artist and asked him if he would illustrate the first book.

Well, just like one of my students he hasn’t done well without deadlines, so I have given him a deadline of two pages due each Sunday night until Jan. 1. Anyway, he sent me the first two pages that he chose to do first.

This is the middle of the book, but I haven’t seen Esmeralda but in my own mind for almost 20 years. I spent about an hour last night with tears in my eyes just staring at her. I feel like one of my own children has finally grown up and…moved out.

I wanted you all to meet her. Now, to beg for prayers for publishers and an agent.
Thank you all for letting me share with you as much as I do. You all make me so happy. Have a great day!